Comic books were anathema in my house when I was a child. My mother sniffed at them so sniffily that whenever I bought an Archie comic book, sneaking it into my room like the contraband it was, guilt trumped pleasure every time.

Only one comic strip was lauded in those days—Ernie Bushmiller’s Nancy—because Bushmiller was her father’s patient. Before Maus, the term graphic novel most likely brought to mind In Cold Blood or possibly Lady Chatterly’s Lover, both of which were on our bookshelf. 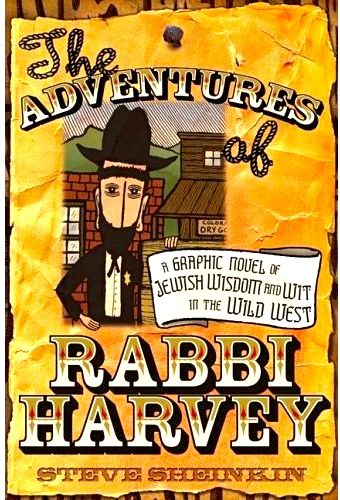 Click the cover to visit the book’s homepage at Jewish Lights.

So when Steve Sheinkin’s The Adventures of Rabbi Harvey crossed my desk, I had to stop my nostrils from flaring and quiet the voice of inner Mom-scorn. Subtitled A Graphic Novel of Jewish Wisdom and Wit in the Wild West, the three-book Rabbi Harvey series would have made even my comic-disdaining mother open the front door wide with welcome.

The rabbi’s adventures are built upon classic Jewish texts and teachers: Rabbi Nachman of Breslov, the Baal Shem Tov, Talmudic teachings and Pirke Avot, The Ethics of the Fathers. It’s whimsical; it’s wonderful; its wise and wacky with equal amounts of insight and sight gags. Time and again I marveled to be reading texts I have studied for years transposed to dusty corrals and cornfields. From wisdom gathered across the centuries, and filtered through a passel of delightful characters, come issues we continue to struggle with today.

Each chapter begins with a dilemma that Rabbi Harvey soon rides in to solve. Stagecoach bullies, ruthless outlaws, a thieving traveling salesman and more are all vanquished by Rabbi Harvey, who carries little more than the smarts beneath his 10-gallon hat. In a chapter called “Stump the Rabbi” the setting is the most popular event at the yearly Elk Spring Fair. For five cents, Rabbi Harvey promises to answer any question. A most poignant dilemma closes the chapter. The issues raised by the Elk Spring challenger predate the Shoah (Holocaust). Rabbi Harvey’s answer, in the form of another question, evokes it.

“Something has been bothering me, Rabbi.
Yes, Albert?
Slavery, the Civil War, stealing land from the Indians…How could all these things happen in our country? I don’t understand  Where was God?

“Rabbi Harvey thought for a moment. Then he responded with a question of his own.

“Where were the people?
This got to them both to thinking.”

In Sheinkin’s hands, the Chasidic tale The Chicken Prince comes to life anew. A boy named Asher assumes the role of the Chicken Prince, taking up residence beneath the dining room table. Asher disrobes and begins pecking for corn from the ground. Rabbi Harvey approaches his distraught parents and offers his help. Before they know it, the rabbi has also disrobed, joining Asher beneath the table where they both start clucking and pecking for grain. Then one day, Rabbi Harvey shows up with two shirts and asks Asher if wearing a shirt would get in the way of his being a chicken. Asher agrees that it would not. Pants, socks and shoes follow and soon enough Asher trails the rabbi out from beneath the table.

The Wild West ending is even better than the original. Although the link above offers one lesson to this parable—Am I limiting my potential because of my self-perception?—Sheinkin made me consider the Chicken Prince from a different angle. Perhaps this tale is also about how we perceive others. Rabbi Nachman of Breslov could just as well have been reminding us that when it comes to those whom we think are different or limited, we must first get down on their level, see and experience the world as they do, and then and only then might they feel safe enough to join us in ours.

Pirke Avot asks, Who is wise? And answers, He who learns from every man. I won’t claim to be wise, but I will say that I am delighted to learn from Rabbi Harvey, my new and completely guilt-free comic book hero.

WHAT DOES “SECHEL” MEAN?