Chance Encounters: Dinah Berland and a stranger in the gardens 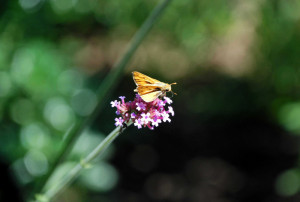 One of the things I have always loved about traveling are the chance encounters that are way better than anything one could have planned. Aufruf is a Yiddish word that means “calling up.” It has come to refer to the ceremony at which an engaged couple is called up to be blessed at Sabbath services the week (or day) prior to their wedding. The groom’s parents host a special luncheon in the couple’s honor.  During the service, Elliot chanted in Hebrew the Haftarah, the reading from prophets chosen to serve as a supporting text to the weekly Torah reading. Elizabeth chanted the blessings and read the translation. The rabbi gave them a beautiful blessing, after which they were showered with candy, to symbolize our wishes for a sweet life together.

During the luncheon, I was sitting at a table with some of Elizabeth’s family when we were joined by a mother and her two adult daughters.  We talked about an upcoming trip to Paris the mom was to make with one of her granddaughters and about the daughters’ work. The mom and I got to talking.  Oh, you wrote a book?  So did I!  What was your book? When she told me I nearly dropped my kugel because I knew about her book.  I’d read some wonderful reviews and excerpts. OK, hadn’t bought it but had always meant to. 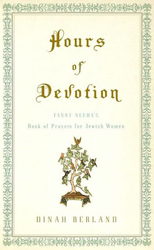 I stopped eating and listened to Dinah Berland’s story, a story I remembered from reading the wonderful reviews when her book—Hours of Devotion: Fanny Neuda’s Book of Prayers for Jewish Women

—came out. The story itself is one of wonderful coincidence: Dinah had been estranged from her son for eleven years when she stumbled upon a book of personal prayers (techines) written by Fanny Neuda, a German woman, the daughter of a rabbi, and published in 1885. And there the author was at my table, telling me the story of finding Neuda’s book in the original German in a used bookstore in LA, and opening it right to a techine asking God to watch over a son who is far away.

With the discovery, and subsequent translation and publication of this book, Dinah Berland pretty much resurrected this beautiful tradition of women’s prayers, prayers that center on home life and women’s experiences — childbirth, the day of one’s son’s bris, taking a child to school for the first time, lighting Sabbath candles.  Who of us hasn’t uttered a silent modern-day techine — asking God to watch over our teens when they get their driver’s license? Time is irrelevant to mothers’ hopes for their children’s safety and wellbeing. Dinah and I agreed to trade books then and there. I look forward to reading a book I knew about and am now grateful to know its author. 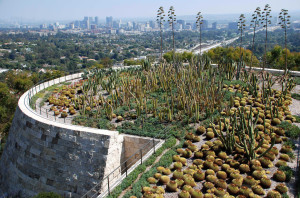 This cactus garden is just one of many on the Getty Center grounds.

A few days after meeting Dinah Berland, Martin and I went to the Getty Center in LA. Better than the art (although the art is pretty spectacular) are the grounds. Set high upon a hilltop overlooking Los Angeles, the Getty Center’s gardens are stunning, filled with peaceful nooks, exquisite plantings and 360 degree views.  Still trying to assimilate all that had happened over the past few days, I let Martin go ahead. I settled on a bench and closed my eyes for some quiet time.

A voice interrupted my thoughts. I opened my eyes. Asked the cute young man standing before me to repeat himself. “You look so peaceful and happy. What is your secret?”  he said. Oy if you only knew! I thought to myself. But then I decided to just run with the moment. “I don’t know what you saw on my face, but if I told you the week I’ve had, you might not believe it.”  I gave him the elevator version — Mom died last week; son is getting married this week.  “Wow!” he replied. “Can I sit down and talk to you? You’ve experienced things I can’t even imagine.” 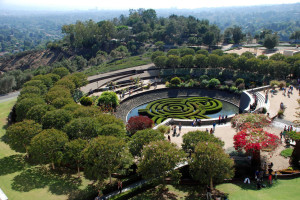 We were sitting just up from the topiary maze, off to the right

For the next thirty minutes or so this twenty something young man and I talked about life. About parents and letting go.  About girlfriends and commitment.  He was debating a move to New York to be with his lawyer girlfriend. He had so many questions about marriage. What was it really like?  Was it was worth it? None of his married friends seemed happy.  Feeling quite on in years, but also keenly aware that this was a moment that he might always remember, I told him that my husband and I would soon be married 34 years. Marriage wasn’t always a walk in the park; it took work and compromise; understanding and forgiveness; an ongoing sense of adventure and a willingness to grow. I believed strongly in the value of marriage and regretted how easily folks seem to go in and out of it. Or not at all. He didn’t seem too ready to move to New York to be with the girlfriend.  (I  confess to a fleeting thought of fixing him up with my daughter.)

The conversation ran its course and we parted after a half hour or so. Way cool, this magical moment that highlighted how far I’ve come, how many years are tucked under the belt that keeps my mom jeans up, and how grateful I am that this young man singled me out for a deep conversation about life on a beautiful sunny day. I sent a prayer his way, a techine of sorts that he finds his way, happily and in safety. 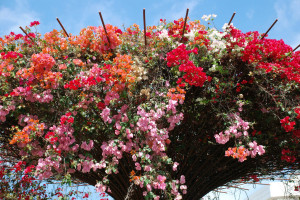