Worrying like Ping? You still can’t prevent a whack. 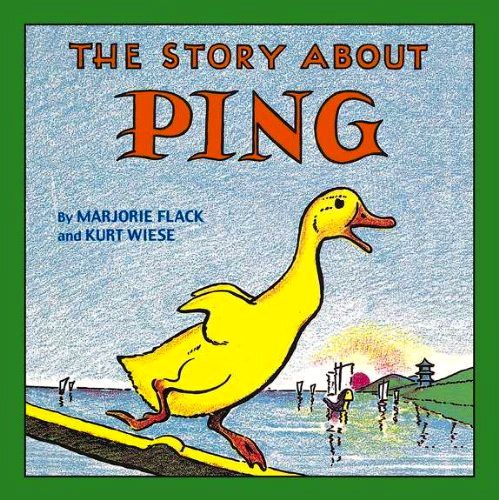 Who else remembers Capt. Kangaroo reading this?

When I get to yoga class just under the wire, I often think about Ping, the duck in Marjorie Flack’s children’s book. As I sign in, my name last on the list, I anticipate an imaginary whack on the back, like the one Ping received each evening when he returned late to the wise-eyed boat that floated on the Yangtze river. In the story, read to millions by Captain Kangaroo, Ping becomes so worried about avoiding an occasional whack that, one night, he dares to …

(Well, if this story is new to you, consider getting your own copy of the children’s classic, The Story about Ping, first published in 1933. And, if you want to discuss Ping further, please add a Comment below!)

One morning, I was as worried as Ping! I was late enough that class already was beginning!

The teacher had to ask two students to pull their mats aside for me so that I could roll mine between theirs.  They did, and the class proceeded: down dogs giving way to warriors one and two, which evolved into revolving triangles, half-moons and such. I felt a twinge of guilt for disrupting the yoginis beside me, but soon got into the flow as they say and welcomed the calm that yoga practice brings. The day’s true lesson was soon to come.

After class I approached the two women who had made room for me. I thanked each one in turn for doing so and apologized for disrupting their practice just as they were settling in.

The first woman responded: “Oh don’t worry about it!”  She laughed and waved her hand. “We all come late at some time or another.” I shared her laugh and thanked her for being so understanding.

Then, I turned to the second woman. I offered the same message, same offer of thanks, same apology.

But, this second woman snarled at me. I don’t even remember what she said, if indeed she answered with anything beyond the snarl. Her response made it clear that she was mightily ticked off to the max. I had committed a grave wrong and she wasn’t going to let me off the hook—even after an hour of very relaxing yoga practice.

Then, came the insight: So often the reactions we get from people have nothing to do with us. However much I worry, and however sincere my apology may be, I still can’t prevent an occasional whack. People often respond to us with what they already have bottled up inside of them.

The first woman made room for me on the floor at the start of class, and room for me in her heart in accepting my apology.

The second woman had spent her hour of practice mentally rebuking me as she moved into each pose, so much so that by the end of class she was a hot mess of resentment.My apology probably didn’t soften the first woman’s attitude any more than it turned the second woman into, well, a number two kind of come-back.

That morning’s biggest revelation wasn’t Hey! I can hold this pose today—but that others’ reactions to us—often just ain’t about us.