Debra Darvick reviews The End of Your Life Book Club 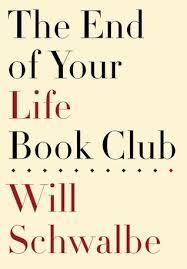 Will Schwalbe has written a beautiful book. When his mother, Mary Anne Schwalbe, was diagnosed with pancreatic cancer, he accompanied her to her treatments. Over the course of those long afternoons in Memorial Sloan-Kettering’s waiting rooms and treatment rooms, they discussed the books they were reading. Discussions turned to trading books, and trading books turned to revisiting old favorites and uncovering new treasures. Before they knew it, they had formed an ad hoc two member book club.

Their reading choices were eclectic: high brow, low brow, classics and popular novels. As Schwalbe wrote,” We read casually, promiscuously and whimsically.” Each chapter references a book under discussion, some of which I had read, many of which I hadn’t but have now placed on my list. I felt as if I had been turned into an eager fly-on-the-wall member of their book club, listening while this devoted mother and son discussed not only books, but their lives, their relationship, and the inevitable end that Mary Anne Schwalbe bravely fought off for two and a half years.

Talking about the book with some girlfriends, I realized we all held Mary Anne Schwalbe in awe.  Mother of three, she worked full time, which back in the 60’s wasn’t all too common.  She was a dynamo — director of admissions at Harvard, a college counselor at one New York school and the head of the high school at another. And then there were the organizations she belonged to, visiting Afghanistan nearly a dozen times, devoted to the  plight of the refugees; she worked with a foundation that built libraries in the country. Her kids couldn’t play with gifts until their thank you notes had been written and they learned the lesson while they were young that if they weren’t ten minutes early, they were late. Talking with my friends, I realized that I wasn’t the only one comparing myself to Will’s mother and feeling like I came up woefully short.

This is a book about love, between a reader and his books, between a mother and her son. We learn that Mrs. Schwalbe always read the end of a book first, because, as her son wrote, “she couldn’t wait to find out how things would turn out.” I didn’t have to read the end first because I already knew how this book would turn out. But I was loathe to finish it because, in that way of magical thinking that readers have, if I didn’t finish it, Mary Anne Schwalbe wouldn’t have to die, and her son Will wouldn’t have to lose her. And in a way, he hasn’t. She is alive in the books that she read, and in the discussions they had. And now, with The End of Your Life Book Club makings its way hand to hand and reader to reader, Will’s mom will indeed live on in the readers whom she has inspired to read and read and keep reading. Schwalbe wrote that he learned this from his mother: reading isn’t the opposite of doing, it’s the opposite of dying. She was exactly right.