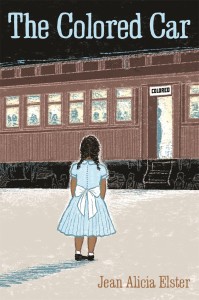 (CLICK the cover to visit the book’s Amazon page.)

Merely typing these three words—The Colored Car—makes me cringe. Compressed into those four syllables is an arc of our country’s history run through with inhumanity, pain, bigotry, humiliation. It is an apt title, the only title really, for Jean Alicia Elster’s new novel for ages 10 and up.

I’ve lost count how many years Alicia and I have been friends—a decade at least. I remember the lunch where she began sharing the seeds of what would become this wonderful novel based on her own family’s history.  And, I’m going to refer to her in this review as “Alicia”—the name by which I know her so well, as a sign of my affection for her and for this moving story she now is giving to the world.

Back in the 1930’s, Alicia’s grandmother took her four daughters South from Detroit to visit her family in Tennessee.  Changing trains in Cincinnati, they had to disembark and board the colored car. The impact this left, especially on one of Alicia’s mothers’ sisters, is the loom upon which she wove the novel. The colored car becomes the metaphor not only for the Jim Crow bigotry confronting young Patsy (Alicia’s aunt, Maber Ford Hill) in Cincinnati, but for prejudices faced in their hometown of Detroit, and the betrayals that came their way from their own neighbors, neighbors with whom they had shared food and firewood, extending kindness upon kindness only to be repaid with trumped up lawsuits (thrown out) and arson (never prosecuted).

In Alicia’s capable hands the colored car also becomes a runner’s block against which Patsy moves forward, learning to define herself by virtue of her own life experiences and not through the experiences thrust upon her by the racists in her midst. Young readers will naturally see this story through the eyes of its young protagonist, feeling her humiliation and hurt, and ultimately her growth.

What they may well miss is the persona of Patsy’s mother, Alicia’s Grandmother Ford, for whom the words quiet strength and dignity could have been coined. Young readers will miss how sharply the words, “Oh Sweetheart, It won’t be so bad, You’ll fall asleep. We’ll be there before you know it bright and early in the morning,” must have stuck in Patsy’s mother’s throat as she tried to coax her outraged young daughter onto the colored car.  Young readers today might find her canning 1000 jars of fruits, jams and vegetables curious, but likely won’t feel a tug of nostalgia for a beloved grandmother whose kitchen skills matched those of Grandmother Ford. Alicia paints not only a searing portrait of racism but a beautiful elegy to her grandmother, and to a way of life that is no more.

Care to read more from Alicia? She writes a special FeedTheSpirit column about the traditional method her family followed to make grape jelly. 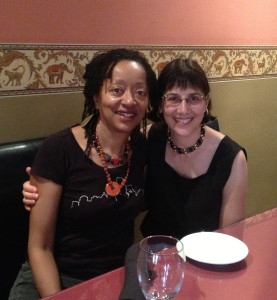 The threads to Alicia’s novel-to-be were teased out at a lunch just like this.