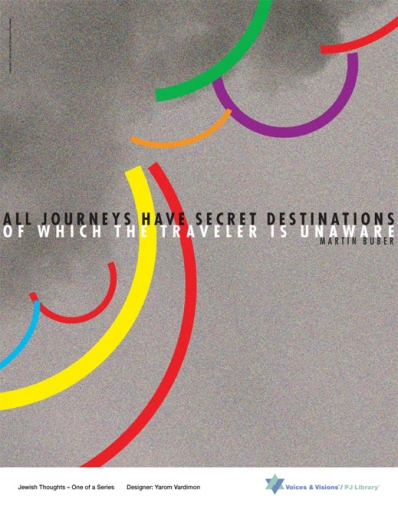 Last Saturday in synagogue, instead of a sermon, we had a fabulous discussion inspired by  the Voices & Visions™ project, an exhibit sponsored by the Harold Grinspoon Foundation. Voices & Visions™ is about art, about powerful messages, about combining them into posters, about starting conversations, about continuing the Jewish journey.

The exhibit consists of 18 posters melding Jewish wisdom (quotes by Maimonides, Martin Buber, Susan Sontag and more) and art created by today’s top graphic designers and illustrators. Although I find it hard to believe that the work of only two women—Carin Goldberg and Paula Scher—made the cut. Goldberg’s effective illustration (A human being is like a letter of the alphabet: to produce a word it must combine with another) embedded the quote within an alphabet, forcing the reader to decode it one word at a time and heightening the quote’s power and message. Scher’s illustration, simple and streamlined, brought to life Rabbi Abraham Joshua Heschel’s famous quote, “When I marched in Selma, I felt my legs were praying.” 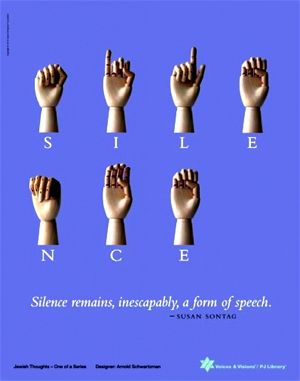 During what would have been the break for sermon, we trooped into the social hall to view the posters. There were additional copies for us to bring to the tables set up around the room for discussion. With our favorites in hand, we did what Jews do best—we talked. About the posters, about the quotes, about the integration of the images and the thoughts that inspired them. Susan’s Sontag’s words on silence, Silence remains inescapably a form of speech  were paired with images of American Sign Language.

I was drawn to a quote by Maimonides, A miracle cannot prove what is impossible; it only confirms what is possible.  Seymour Chwast’s illustration and Daniel Gordis’ commentary were fabulous accompaniments, one of the most effective pairings, I thought. Can you find Jonah and the whale? Hint: Use your head.

A friend and I both went for image above featuring the colorful arcs and the quote by Martin Buber, All journeys have a secret destination of which the traveler is unaware. Paul commented that initially the arcs are rendered in primary colors. As the illustration progresses there is a shift to secondary colors. His keen observation totally escaped me. My take on it was a bit more pedestrian, in that I focused on the fact that some roads led to nowhere, others intersected, and still others went in two directions at once.

What piqued my interest even more was Bubers’ choice of the word “secret.” Why a secret destination instead of one hidden or unknown? Hidden and unknown imply destinations that may never come to light. Yes, secret-keeping has a dark side, but it also has the promise of felicity and surprise. It holds the promise of eventual revelation.  Secret implies a dyad—one entity possesses knowledge that the other will ultimately realize. Perhaps Buber was suggesting the Divine hand shaping our path has scattered it with gems of revelation for us to find. Some will undoubtedly be dark as coal; but others, if we are fortunate and manage a glass-half-full kind of perspective, will ultimately sparkle with diamond-like clarity.

Voices & Visions™ is a brilliant collaboration and one that I plan to revisit. Visit the site or check out the video .

Which poster resonates with you?

What quote draws you in?