Did Mr. McGregor Ever Try Non-Attachment? 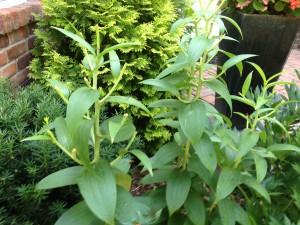 The lilies were mere days from opening. Six stalks heavy with close to three dozen blossoms, each blossom swaddled within its own petals. In full bloom they would soon measure five to six inches in circumference,  bright white petals outlined in deep pink.  I went out to check on them yesterday and …

Every. Last. One. Vanished.

Each flower had been snipped off at the base of the bud.  And to add to the mayhem, mystery:  the severed blossoms were nowhere in sight. It was as if someone had come in the middle of the night, clipped them with a hedge trimmer and made off in the dark with my long-awaited botanical bounty.

Who or what could have done this? It would have been one thing if the blossoms had been scattered four feet below on the ground around the base of the plants. The rabbits love to do that. It’s a special bunny game called Torture-the-Gardener. It goes like this: watch for the tulips to bloom that the Gardener planted last fall. Await her cries of delight and excitement as the tulip flowers are 17 hours from fully opening.  Creep out in the light of a spring moon, nibble them off at the bases and leave the petals scattered like so much dead confetti for Gardener to find when she comes out the following morning. Enjoy watching her scream and steam. Cover Baby Bunny’s ears from the foul language.

I’ve quit skirmishing with the chipmunks of late. They’re impervious to the taste of Tabasco, use  putrid egg potion as perfume, are dextrous enough to pilfer a single nut from my Hav-a-Heart traps. But they couldn’t have climbed the lilies’ sturdy stalks, could they? Bitten off the flowers one blossom at a time and carried them down into their little chippie tunnels? Had they invented specialized lily-ladders? Or had deer come for a midnight snack? I saw no tell-tale prints, nor droppings, but I have seen a few of these white-tailed destroyers every now and then in the neighborhood. As far as I know, I have no human enemies, no neighborhood gardeners who envy my echinacea.  Irrelevant, who did the dastardly deed. I am nevertheless lily-less.

A few years ago, staring at those stems, shorn of all that potential and imminent beauty, I would have been truly livid. Today, I just shrug. It’s not worth the wrath. So the deer ate the lilies. Or the chipmunks managed to pilfer them in some way, lock, stock and stamen. Maybe it’s all the yoga. Or maybe thirty years of tilling these dear patches of earth, riding the peaks and valleys of growth and destruction has taught me non-attachment.  Maybe this is what a Zen garden truly is — not one of tenderly raked gravel and exquisitely pruned shrubs.  But a garden where destruction is met with equanimity and joy can still be savored in what was potential and imminent.

How is your garden growing? Share this column with your gardening buddies by clicking Facebook’s “f”.  And if you have some tricks to keep the varmints at bay, do tell. 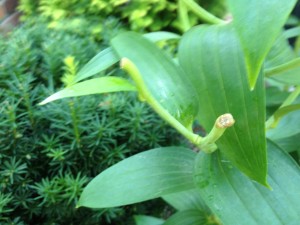