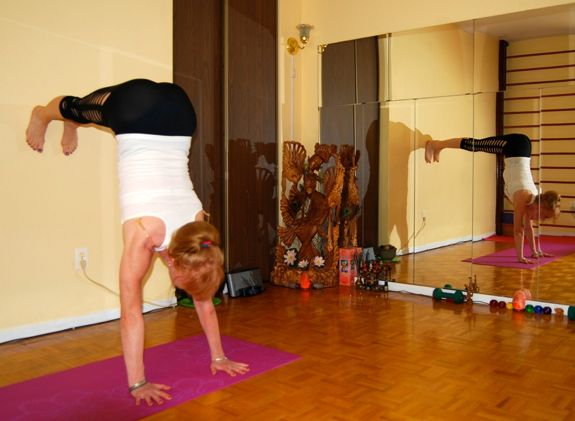 Thanks to yoga photographer Sarah Siblik for sharing this photo via Creative Commons on Flickr.

For years, the yoga posture known as “wall dog” stymied me.  There are two versions. In the first, you bend at the waist, feet on the floor, torso flat and elongated, arms straight, palms flat against the wall. The second version is more challenging: arms and legs switch places so that the legs are against the wall, the torso is straight, at right angles to the floor and supported by the arms.

I could get my legs against the wall; I could support my torso with my arms. But for the life of me I couldn’t straighten my legs and keep my arms and torso perpendicular to the floor. Every time our teacher called this one out to us, it felt like there was simultaneously too much of me and not enough. Either my legs were too long to straighten (Hah! When have my legs EVER been too long?) or my torso was too, too something.  How could there be too much of me, and not enough of me at the same time? I never could figure it out, and just did the best I could. It is yoga after all. Perfection isn’t the goal. Acceptance is.

Over time I drifted into other yoga classes, wall dog became less of an issue, and I moved on. Until last month. I’m coming up on eight years of practicing yoga and every year understand more deeply that yoga is indeed a practice. We come back to the mat again and again, going through the same postures, adding new ones, gaining insights, making subtle shifts in ones that are old familiar friends.

And then sometimes there’s a bit of magic on the mat, too. Sometimes the wall dog that always felt as cramped as an armadillo, smooths out sleek as a greyhound. I don’t know how it happened or what inside or outside of me changed. Last month, when the teacher directed us into wall dog, my body just did it. My legs straightened; my arms remained at 90°; my torso didn’t wobble. It was the mirror opposite of past such attempts when there was too much of me and too little of me. This time around, without much conscious thought or effort, my entire body just accommodated itself to the posture. There was room for all of me, inside and out.

What yoga pose has given you fits in the past that no longer does? Do you have a favorite?