It IS Easy Eating Green 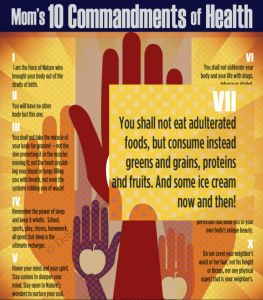 When the kids were little, I planned out the week’s meals every Sunday, organizing my grocery list according to Kroger’s aisles. Nowadays, meals are more ad hoc. If all Cook wants to make is scrambled eggs or oatmeal, then that’s what we eat. On most other nights we eat what Mom’s Seventh Commandment advises — greens and grains, proteins and fruits. But making salads is so involved. There’s all that rinsing, peeling, paring and chopping. For just one salad or dish. Tedious. Repetitive. Ugh. Life was so much easier when we followed the holy triumvirate of nutrition. Meat, veggie, starch, and you were done.

Last week while unloading the groceries, I had an inspiration. Maybe all of you out there have been doing this for decades. If so, why hasn’t anyone suggested that instead of putting it all away, prep it first and THEN put it away? 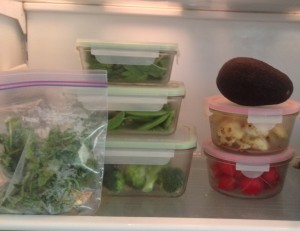 I started with the broccoli, cutting off the stems and peeling them to crunch on while I worked. I rinsed the florets and put them in a container. Then thought, well why not make vegetable soup while you’re at it? And what about making up a pot of rice to have all week? And if you’re going to be here for a while anyway, roast a few yams (one of my favorite breakfasts, peeled and smooshed up with a teeny drizzle of maple syrup.) Out came my soup pot and a box of Imagine vegetable stock. In went the rest of the broccoli stems and a handful of florets and some other veggies that were fresh and feeling lonely : corn off the cob, a handful or two of those baby carrots, a quartered onion, and some frozen mixed stir fry veggies.

While the soup bubbled I turned to the rest: washed and trimmed cauliflower, spinach and pea pods. When I got to the radishes, instead of tossing or composting the green tops I washed and bagged them. Next morning I threw them into a breakfast smoothie.  A bit piquant but a great boost of natural chlorophyl courtesy of Mother Nature’s photosynthesis.

If you don’t have an immersion blender, look into getting one. Greatest little gadget around. Years ago I saw one in a grocery store for under $30 and It’s been my kitchen bestie every since. I used it to whir up some of the veggies to thicken the soup and added a cup of the rice, which by that time was done and ready to be containered for a future meal or two of stir fries.

Usually I try to put away the groceries quickly and get on to (supposedly) more important things. Last week’s experiment was much more pleasurable, creative and in the long run time saving, as I’m still using every bit of what I prepped.

That nifty little poster up there? Mom’s Ten Commandments of Health  is something I created for my kids when they were newly on their own. Order one for yourself, or for someone else whose good health matters to you. They’re available at my new Etsy store, or by contacting me directly.

Since Mom’s Seventh Commandment invites ice cream, here’s a home made recipe. Substitute maple syrup or any of the other sugar substitutes if you don’t want to use sugar.

Mix salt and ice in gallon-sized Ziploc® bag and set aside. Put cream, vanilla, sugar in a quart-sized Ziploc® and nestle it inside the big one. Wrap the bags in a towel and start shaking and rolling them together. Take care not to get frostbite! The bag with the salt and ice will get very cold, so keep the towel around the whole thing. After five or ten minutes carefully check on the ice cream in the smaller bag. If you want it a bit firmer, put it in the freezer for a few minutes and then do the shaking and rolling process all over again.  It won’t get as hard as grocery store ice cream; more like custard in texture. You can add anything you want to it—chocolate bits, sliced bananas, strawberries or blueberries…..