It was Fifty-Years Ago Today….. 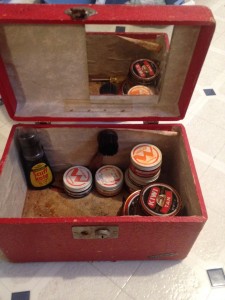 Basements are the modern-day equivalent to the genizah. Genizah, (Hebrew root g-n-z) originally referred to the act of putting away or hiding. The word eventually developed to refer to the actual place where things were deposited, which I think is a perfect example of synecdoche.  Genizahs are temporary holding places for Hebrew texts, prayer books, scrolls, anything containing God’s name until the time that they can be buried. Yes, we Jews bury our holy books. Amazing concept to treat a document as lovingly and respectfully as we do a loved one whose earthly purpose is no more.

Back to yesterday and the basement where I was tackling dust bunnies that had grown to Harvey-ian dust rabbit proportions. Decades-old tins of Kiwi shoe polish, metal skewers for shish kabobs, loose screws (so that’s where they all go when I am distracted!) I opened a cabinet door and fell down the rabbit hole of time: the cards we received when Elliot was born; photos; letters from and to my mother and other relatives; a caricature a college roommate did of me freshman year; a letter from my paternal grandmother to my mother after my parents divorced in which she referenced the weather, a boy I was dating, fabric she had 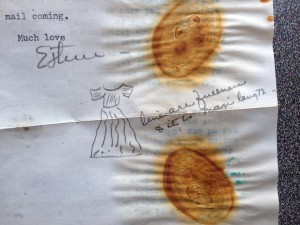 She wrote: lines are fullness & it is maxi length

bought to make me a dress, commenting that she had so many slips of papers she would, “have to find a new hiding place for them, but then I’ll forget to look for them.” Makes me smile to realize I had done much the same thing: hidden away her letter, forgotten it, only to find it again.

The greatest finds were my schoolwork from third and fourth grade. Stacks and stacks of spelling tests, math tests, geography and science tests.  Cotton seeds are planted in late spring. The early Georgia Indians were buried in mounds I wrote in not too badly rendered script.  Each week’s exercises were stapled together and placed into a construction paper folder whose covers we decorated with the theme of the week. My father’s signature appears in the lower left hand corner. The coming week’s menu was vintage cafeteria: Pot roast on Monday, fried chicken for Wednesday. Of course fish sticks for Friday. I don’t know what “Pop Eye” salad* was, but loved the reference to Thursday’s dessert: “Red Tokay Grapes.”  Never had peach cobbler as good since. 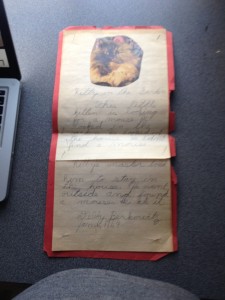 * On a whim I looked it up.  Sheesh. You can find anything on the internet. Including a school cafeteria recipe for Pop-Eye Salad. If only John Dunne had had access to Wikipedia. He would have known where to find the past years and who cleft the Devil’s foot.