It was called the Spanish house 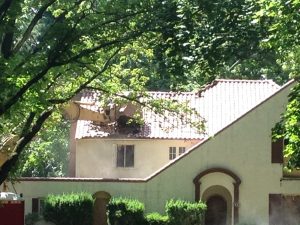 A neighborhood icon bites the dust.

Anyone who walks this neighborhood knew which one you were talking about when you mentioned the Spanish house. It was one of the town’s oldest. The one with the red tile roof. The one whose charming arched front door had been treated like a fine painting: matted first with a beautiful arch of stone, then a filet of pale plaster, and then framed with a carved wood surround. It was the one sitting way back on a large swath of land, shaded by maples dating back close to a century. Anyone and everyone knew which one you meant when you sighed over the beauty of the Spanish house. Martin and I dreaded what we knew was coming the day we saw a construction company’s sign on the front lawn and an orange portapotty toward the back.

When we walked by today, the sound of the backhoe’s bucket shattering those beautiful terra-cotta tiles shattered something within me too. I know that I’ve crossed well into middle age because I now ask in the face this change and supposed progress, “Is nothing sacred?”

I guess it’s a sign of a recovering economy that may trickle down to those manufacturing the timber and the wiring, the insulation and the fittings. Another McMansion is about to go up. I can’t help but think it’s also a sign of an appalling lack of appreciation for what once was. I know, I know, this diatribe is a precious lamenting of one era’s manse being replaced by another. There are bigger things to protest. A home demolished in a Michigan neighborhood is nothing in light of the massacre in South Carolina or the deaths from the heat wave in Karachi.

Martin and I walked over to the police officer who was watching the demolition from his patrol car. Perhaps he was required to be there, (un)building codes and all.  Or perhaps he was there as we were, another gray-haired and saddened bystander.  “I hope they leave the Moose House alone,” he said. “The owner died last month.”  I knew instantly the one he meant. The sweet yellow shingled house a few blocks down from here. The one with the kelly green shutters and the huge antlered moose head that hung to the left of the home’s front door. The moose whose antlers were strung with lights at Christmas time. The moose that a friend’s daughter visited on their daily walks, bringing him a handful of Hershey’s kisses. Sometimes, she would even tell the moose stories before leaving her foil-wrapped gifts on the bench beneath her antlered friend.

We’ve been living in this neighborhood for three decades and then some. When we arrived, I was nine months pregnant with my first. Over the years, I’ve watched the block’s nearly two dozen kids take flight. I guess that now qualifies me for geezer status. I hope it also qualifies me for bard or chronicler or storyteller. That way, if a young one overhears the elders talking one day and asks, “What’s the Spanish house?” or “What’s the Moose house?” I’ll be able to answer. 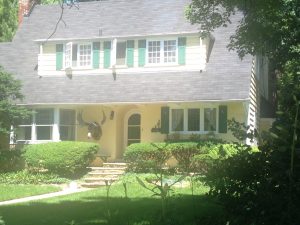 Hopefully saner heads, and a moose head, will prevail.