Pussycat Pussycat Where Have You Been?

Well, not visiting the Queen. We leave those glamorous trips to my sister-in-law, just back from London in preparation for the April 29th wedding of Prince William to Kate Middleton. The walk down Westminister Abbey’s aisle takes four minute, in case you’re wondering.

So in addition to working and working out, practicing yoga and taking a lovely trip to visit our son and enjoying a quick visit with our daughter who came home for a weekend, I have been reading. So here goes — a collection of mini book reviews:

Devotion by Dani Shapiro. I have waited so long to write about this book that it is now out in paperback. Which might be even better b/c it will be cheaper to purchase and the book is an absolute keeper. Devotion is Shapiro’s second memoir. How does someone in her forties already write two memoirs? The woman does a lot of living, which also includes authoring five novels.

I met her when she was in town for Detroit’s Jewish Book Fair last November and she was stupendous. Engaging, forthright, giving of her insights and experiences and impetus for writing a second memoir, this time at mid-life. Devotion is the story of her claiming her spiritual life, of struggling to define her beliefs and figure out .

This isn’t Eat Pray Love. It felt deeper to me, more grounded. There were no fantastic trips, or shimmering blue lights in the midst of meditation. No island lover who becomes a spouse in the next book. This is the journey of a real woman who has thought my same thoughts, faced my same struggles and issues, right down to the odd daily habit of turning off the alarm clock and thinking: “Time to make the donuts.”. (Every morning, I kid you not, I can’t believe she does this too). Dani’s book is worth your time. Whatever platform you choose — hardback, paperback, e-book, papyrus — read it.

Were it July and not March, which here in Michigan is still cold as a the peas in our freezer, I would say that Mothers and Other Liars is a perfect beach read. It’s quick; it tugs at your heart; you keep turning pages to figure out what Ruby Leander is going to do when she discovers the parents of the child she found in a Dumpster nine years ago and is raising as her own, want her back. So wait for the beach. Or do as I did — curl up with a cuppa hot chocolate and enjoy a very satisfying and cozy read.

Whenever I think of Julia Glass I recall reading that she wrote her first book, award winning Three Junes, when her kids were in nursery school. While they were stacking blocks and finger painting, she was madly writing away in a closet in her apartment in Brooklyn. Or was it the Village?

Her third novel, I See You Everywhere, interweaves the lives of the Jardine sisters: Louisa (devoted to the arts, aching for the stability of home and marriage) and Clement (peripatetic saver of creatures great and small.) It, too won an award — 2009 Binghamton University John Gardner Book Award.

I didn’t love it. Not as much as Three Junes and The Whole World Over. But I stayed with Clem and Louisa on my flight to California, rocking back and forth between the chapters that took the girls all over the map — of their interior lives, career moves, adolescent affairs and family secrets. The ending came out of nowhere and had me gasping in my middle seat. I will give Glass that; I didn’t see it coming in the least. And because there is something about Julia Glass that charms me, I will definitely read her latest, The Widower’s Tale. If you’re going to be near Portland Maine on April 2, she’s having an author event.

I read the first part of Wally Lamb’s The Hour I First Believed the way I watch horrifying scenes in the movies: squinting through splayed fingers. OK, I didn’t go that far but I would read a few pages, put it down. Then pick it up again, drawn into the horror of the Columbine shooting and the ruin it made of the lives of Caelum Quirk and his wife Maureen, a teacher who hid in a supply closet, the sounds of the rampage ricocheting like the bullets, all around her.

I didn’t read Lamb’s first two novels. The manic depression in the first book stopped me right there and I let the second one pass me by. They say three’s the charm. This is a huge novel taking Caelum from Colorado back home to Three Rivers, Connecticut where a beloved aunt has just had a stroke.

I am already edging toward 1000 words with this blog and have one more book to share. So I will leave Lamb alone (cop-out, I know.) This is an extraordinary book. Read it. Through splayed fingers or not.

I would like to take an English class titled, The Works of Diane Ackerman. That way I know I would get to every one of her twenty-three books. Essayist, poet, novelist, naturalist, children’s author, Ackerman is the kind of writer who doesn’t just draw you in from her first sentence but stuns you into submission, mouth agape, all your senses firing. Because that’s how Ackerman writes, all senses firing. You turn the pages of her books as if through amber; when you read her, time slows. Your breathing deepens and you disappear into another world. And if that’s not enough, Diane Ackerman is a looker, too; she has that dark-curly haired ethnic Cher look, but sweeter.

This will not be a book review as I am only three pages into One Hundred Names for Love. But here’s the set-up. Ackerman, on book tour, rushes home upon learning her husband has been hospitalized with a systemic staph infection and kidney stones. The day of his discharge, he suffers a stroke. Major stroke. Language-robbing, memory-robbing stroke. To give you an idea of how cruel this one’s going to be, Ackerman writes that during her husband’s three-week hospital stay, he passed the time composing “a complete sonnet cycle about the Egyptian god Osiris.”

The subtitle of One Hundred Names for Love is A Stroke, A Marriage and the Language of Healing. I don’t want to do anything but read. If I were in school I might skip class and spend the day with this book. That’s why I want to take a class devoted to the works of Diane Ackerman. Then, even skipping class could be rationalized under the heading, Doing Homework. 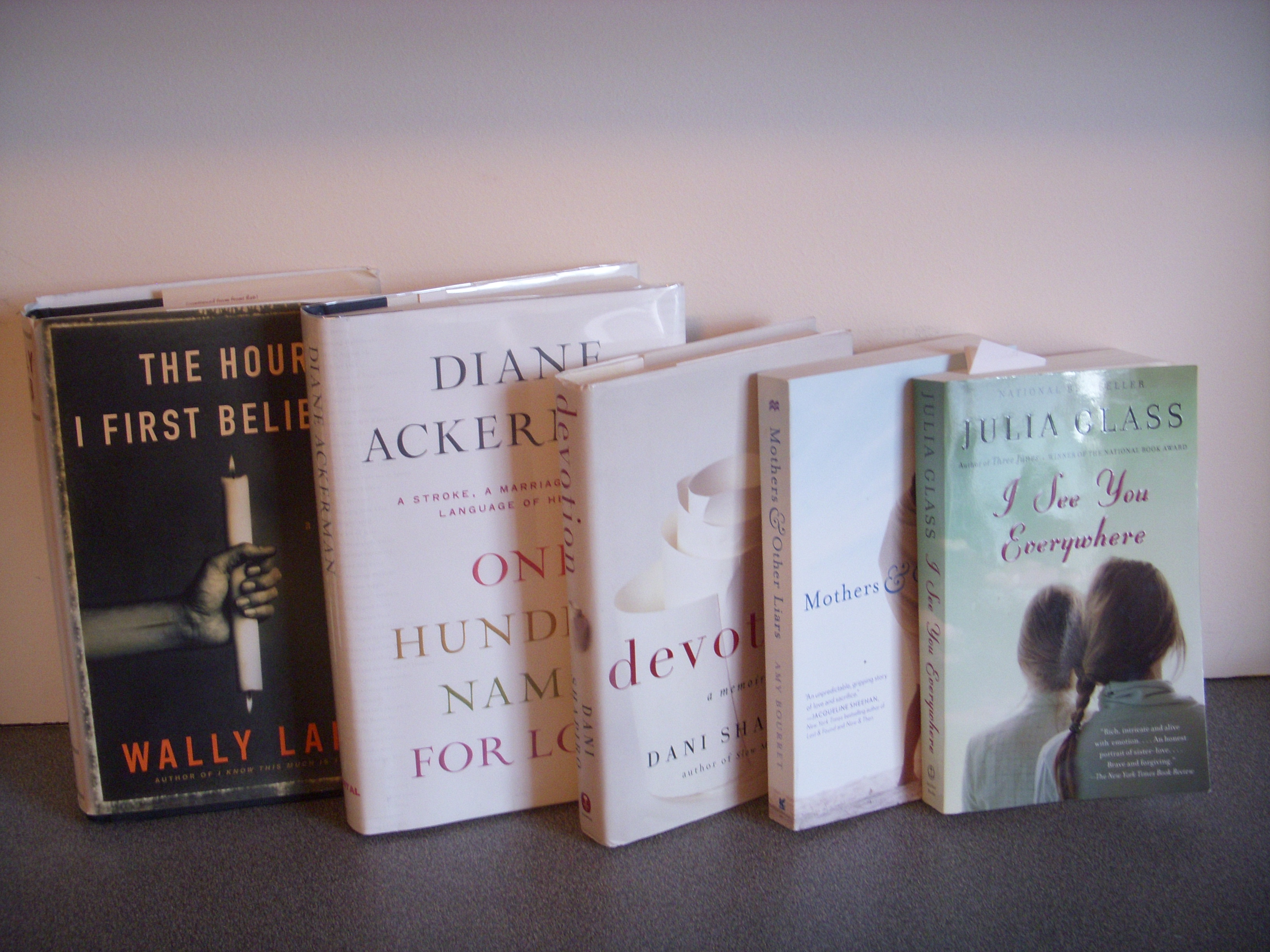