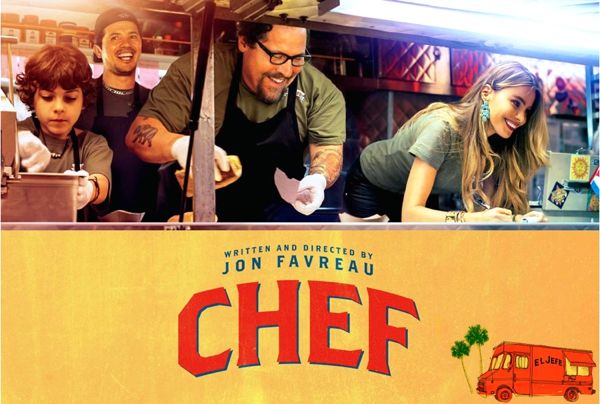 Reading Ross Douthat’s essay, The Parent Trap, reminded me of another reason I liked the movie Chef so much.  (Requisite spoiler alert here: I’m going to spill everything. If you haven’t seen it and plan to, close your computer and head to your local theater. Now.)  I’ll get to Douthat’s essay in a minute. For now, here’s what I loved about Chef:

It was delightful. Basic premise—a once cutting-edge chef finds himself out of work due to creative differences with the owner of his restaurant and a bitter Twitter exchange with a food critic that goes viral. He is also a divorced dad who doesn’t quite have the knack of spending four-star quality time with son.

His four-alarm chili of a Latina ex-wife has been encouraging him to open a food truck. When the shitake hits the fan at the restaurant, Chef accompanies his ex-wife and their child on a family visit to Miami where her second ex-husband (Chef being the first) stakes him to a run-down food truck. He and his son (along with a sous-chef from the restaurant) make a cross-country trip back to LA, serving up kick-ass Cubano sandwiches every stop they make. The son cooks and texts, tweets and vines the whole way, ensuring hungry crowds wherever they go. By the end, father and son are tight as bagels and lox, he remarries his wife, and the food critic stakes him to opening his own restaurant.

I kept waiting for the rug to be pulled out from under me. I kept waiting for that air-tight never-to-be- compromised plot device where the hero is held back from achieving his goal, where he faces huge conflict and betrayals, where he loses big before learning the ultimate lesson. But there were none. Chef never falters or screws up. His son never cuts off a finger with the set of knives his dad buys him; the department of health never cites them for infractions; his former co-worker remains an integral part of the team, never once trying to wrestle away his success.

What also never happens is that social services doesn’t bring the dad up on child abuse charges for employing a minor and/or sequestering him in an unwholesome and potentially dangerous fire-hazard environment. This is where Douthat’s essay comes into play. Douthat wrote about the increasing way parenting (as we once knew it) is coming under fire. Parents have been brought up on neglect charges for letting their kids walk home at dusk, for leaving an 11-year-old in a car while dashing in to pick up a quart of milk, and most outrageous, police were called when someone saw a five- and seven-year-old run across a parking lot alone. Their parents didn’t know; the parking lot was near the kids’ houses. Really. Someone called the police.

I guess this is what I loved best about Chef: a father and son have an adventure replete with sharp knives, hot flames, serving food to strangers, driving long distances without bathroom stops (this definitely wouldn’t have worked with a daughter), making friends and rebuilding their relationship mile after mile. And no one says Boo.

I say Yay. And even if I’ve spoiled the movie, go see it. Even spoiled, Chef will leave a great taste in your heart.