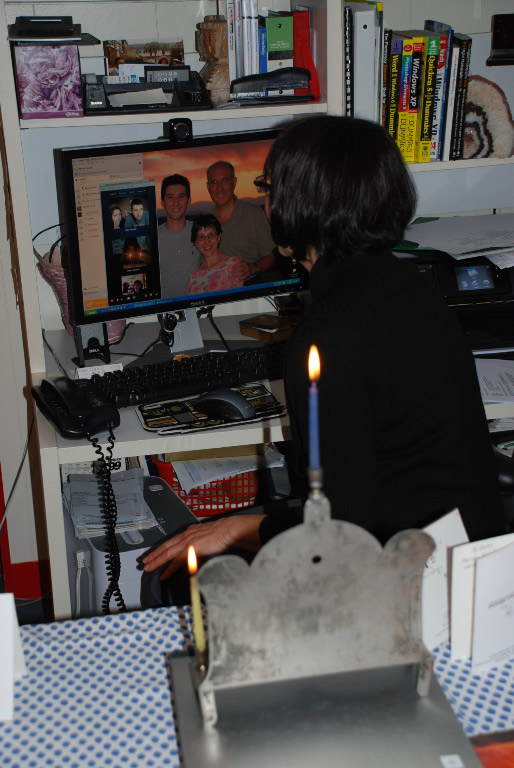 A couple of weeks ago I received an email: “New York Times reporter wants to interview you.”  Yeah, right, I thought; and there is a Nigerian bank account just waiting for me after we talk.

I googled her and it turns out she was legit, a reporter who had seen last year’s post Not By Might, But By Skype Alone in which I recounted how Elliot Skyped us all in while he lit his menorah on the first night of Chanukah. “Were we doing it again, this year?” she asked when I called her.  Hadn’t thought about but sure, why not? Not every day a New York Times reporter calls wanting to write a story about our family.

It took Elliot quite a few tries to get us all on the same screen. I could see the kids but not hear them; they could hear us but not see us. They could see and hear each other but only for a moment before the signal dropped. Finally it all came together, and we were ready for the Darvick family’s tri-state, bi-coastal  Skypanukkah menorah lighting.  Until Elliot realized he had no matches — the modern-day equivalent to “Look, Judah Maccabee! No olive oil.”  Out he ran to borrow a book of matches.

And then there we all were — menorahs turned to our respective computer screens, hearts turned to one another, spirits turned back in time to the Maccabees and the miracle of their triumph for religious freedom, for the right for Jews to live and celebrate freely and in peace.

We struck our matches, lit the shamash, the lead candle, and used it to light the first candle on each of our menorahs. We sang the three blessings and then just laughed and stared at each other for a bit before singing snatches of Chanukah songs and remarking about this 21st century marvel of technology.  While the kids sang   Oh Chanukkah in Yiddish, I thought of the teachers who taught them those words, Holocaust Survivors, modern-day Maccabees who faced down those bent on their complete destruction.

When Jews talk about going home for the holidays, it’s usually for Rosh Hashana or Passover. It’s rarely for this eight-day holiday. Elliot’s Skypanukkah was a perfect way to vanquish the miles and connect. But as I told Ms. Scelfo when she called afterward, no technology will ever take the place of the real thing: being face-to-face and side-by-side with my kids.

Ms. Scelfo’s article appears in Thursday’s New York Times in the Technology section. Or do the high-tech thing and read it here..