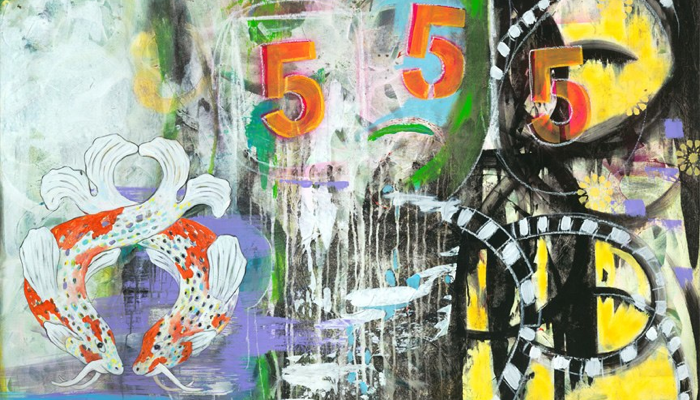 Artist Jodi Fuchs hangs her hat in Santa Monica (when it’s not hanging in Hawaii or Santa Fe). I met her during a walk through this lovely town last month when we stopped into her studio at the corner of Main and Bay. How does an artist come by a free 2000 square foot space right on Santa Monica’s main drag? I’ll let her tell you.

Jodi Fuchs: The space had been sitting vacant for two years and the Archstone Apartments [real estate group] sponsored a contest for artists. The prize: free use of the space for six months for a gallery and studio. I saw the small ad they placed in a local paper and decided on the spot to enter.

Jodi calls her work spiritual graffiti, drawing inspiration from her yoga practice, travels, spirituality and ambientology (more on that later.)

JF: I had just completed teacher training in Kundalini yoga, and my energy was really flowing in a whole new way. I kept seeing the number 555, on clocks, in signs, and I thought, “What the hell does that mean?” I worked the number into a painting, the one I entered in the contest. I tracked down a woman who works with numerology and she told me that a trio of fives means, “buckle your seatbelt, big changes are coming.” She was exactly right. That 555 painting was a prophetic piece.

Jodi’s painting was chosen from among 200 others and it wasn’t long before buckle-your-seatbelt things began happening. Jodi has begun a series of “prayer paintings,” the first of which she did for herself.

JF: I started by writing my prayers [in very loose lettering] on a large canvas. I started to color in the loops of the letters and the negative spaces around them. They are indecipherable but they have a lot of energy. Before I knew, it a company that publishes posters said they wanted to offer it in their roster. I have three commissions as well for weddings. I am writing down the couple’s vows and am weaving their words together, their prayers for each other and their marriage.

The possibilities are endless – there are universal prayers – for prosperity, for health. And then there are those personal prayers, upon the birth of a baby, or even memorial prayers.
It’s exciting to take my work as a painter and my interest in metaphysics and energy work and combine the two in a unique way.

Eager to spread the good karma enveloping her, Jodi sough out ways to share her gallery.

JF: I decided that it was important to extend the space to others, so every three weeks I invite another artist to show his or her work in part of the studio. Some friends and I just organized a weekend craft show that was an amazing success.

These six months have taught me a lot about shameless self-promotion. You have to treat yourself as an entity and not worry about being egotistical. THIS is my business and people have to know about it.

Winning the contest has done more for Fuchs than simply gifting her with an amazing space. It’s challenged her to open up space in other areas of her own life.

JF: I began thinking about other ways to create free studio space. I wrote letters to people who had bought paintings from me in the past. In exchange for paying for my studio space, I allow them to choose a painting. I have three patrons so far.

And what about that ambientology?

JF: (with a laugh) It’s a word I made up; I just liked the sound of it. Going into a space and creating balance comes naturally to me. Ambientology is a way of creating energy in a space.

Which, when you think about it, is exactly what Jodi Fuchs did with her winning studio. Maybe Archstone should consider sponsoring a yearly Ambientology award? If you’re out Santa Monica way, drop by. Jodi has the space through January 2011.

(Here in Detroit there’s been some Pop-Up art action. But what if someone enterprising could turn the former Gap, Kroger and Barnes & Noble into live-work spaces for artists on a grand scale? Thousands of empty square feet. Think of what artists could bring back to what was once a premierly (if Jodi can make up words, so can I!) lucrative intersection in Bloomfield Township.)