Tea for the Bookman 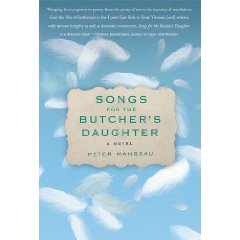 Ich been nit a yid (I am not a Jew) is likely one of the stranger sentences ever uttered in Yiddish. This was Peter Manseau’s answer to the puzzled, elderly Jews whose Yiddish books he had come to rescue and who stood in silence, appraising his lanky form and blonde hair after would introduce himself. Peter? Manseau?

How did the son of a priest and a nun end up conversing in Yiddish, shlepping old and crumbling books across the country and talking with these immigrants over a glaisel tay (cup of tea)? Better yet, how did he come to write SONGS FOR THE BUTCHER’S DAUGHTER a novel about the last surviving Yiddish poet and the young American Catholic man who is translating the aging poet’s memoirs? It’s a long story. Have time for a glaisl tay?

Manseau delivered his talk as only a terrific storyteller can — by offering up one heartfelt insight after another. His parents married on the coattails of the second Vatican Council, confident that the Vatican II’s liberalization would extend to allowing priests and nuns to marry. Didn’t happen. Thus, Manseu was born into what he called “Catholic exile” and grew up believing that in order to be part of a religious community you had to “break rules for righteous reasons.” Religious identity in the Manseau household was not cut and dried or in lockstep with dogma.

A religion major in college, the author studied Greek and Latin but not until he began to study Hebrew did a new way of thinking about and living religion emerge. Julius Lester’s Love Song was an important stepping stone along Manseau’s path. Reading Lester, an African American convert to Judaism, Peter Manseau entered a world of religious storytelling that shifted him from a position of “I believe” to “the ways in which I believe and how that belief relates to community.”

What does an exiled Catholic do after graduating form college with a degree in religion? Enter “Yiddishland,” what else? The nascent National Yiddish Book Center was hiring and as Manseau told it, there weren’t many applicants in Amherst, Mass. who could speak a bit of Yiddish and drive a diesel truck as well. OUTWITTING HISTORY, Aaron Lansky’s account of the gathering of exiled books, is also a must read.

As his Yiddish improved, Peter Manseau began translating poetry from the books he was rescuing. The first was a poem about a religious Jew’s first deliberate transgression — smoking a cigarette on the Sabbath. The poet’s break with lockstep fealty to dogma was a page out of Manseau’s childhood exile. Haltingly making out another book’s author — Hemm–ing-vey — Manseau realized that as he was trying to enter the Yiddish language, the very books he was struggling to comprehend were the Eastern European Jews’ way of engaging with the Gentile world. Imagine Yiddish as the Old World bridge Jews traversed in order to venture into the world at large. Decades later, a 21st century Catholic American struggled to make his way back into that world by reading Yiddish translations of Dickens, Shakespeare and Guy du Maupassant.

American, Catholic, Eastern European, Yiddish. Can one truly tell the story of another? Absolutely. “Telling the story of another people can raise eyebrows,” mused Manseau. “But if we cut ourselves off from others’ stories, how many stories are left for us to tell?” O-meyn!

Harry and David: Faith in the City