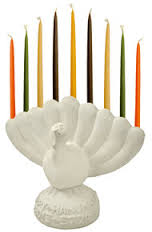 When I first heard of the great cosmic calendrical concurrence of Thanksgiving and Hanukkah, I admit I didn’t give it much thought other than a cursory: Boy it’s coming early this year! I’ve been most focused on the fact that our daughter will be home soon. And not for some little drumstick of a four-day weekend, but for a gobbling-good span of six whole days and nights. It will indeed be good to have Emma with us to light our menorahs and have a small Hanukkah party with the few friends remaining in town for the holiday weekend.

But I thought the mashup of calling it Thanksgivukkah a bit kitschy.

I’ve never cared for the Chrismakkuh label. Hanukkah is not a “Jewish Christmas” despite the two holidays’ proximity on the calendar page each December. Christmas celebrates the birth of Christianity’s Savior. Chanukah commemorates an epic battle fought by Jews determined to preserve their religious heritage and way of life. Part of that religious heritage holds that the Messiah has not yet arrived. So the whole Chrismakkuh idea, although it sells a sleighful of merchandise, always reminded me of the one-hand-clapping koan. (Which has nothing to do with one-hand-clapping Kohens.)

But if there is to be a twinning of American and Jewish holidays, Thanksgiving and Hanukkah are a much better fit.  Hanukkah is all about preserving religious freedom, one of our country’s founding principles. We Jews have much to be grateful for as American citizens. I recognize the good fortune of having been born at this time in history in this particular country. When we light our menorahs each year, it is a blessing that we can fulfill the mitzvah, the commandment, of placing them in the window in order to share the light of the holiday with all who pass by. Not all Jews in this 21st century are as fortunate.

Too, there is the thrill of experiencing a confluence of holidays that will not occur again for another 70,000+ years. That’s pretty spectacular. Just think, Thanksgivukkah might send the phrase “once in a blue moon” right to the linguistic dustbin. Imagine folks a few decades from now greeting one another after a long hiatus, “So good to see you, Caleb. It’s been like what? Since Thanksgivukkah since we’ve been together?”

*5774 is the current year on the Jewish calendar.