Who Woulda Ever Thought? 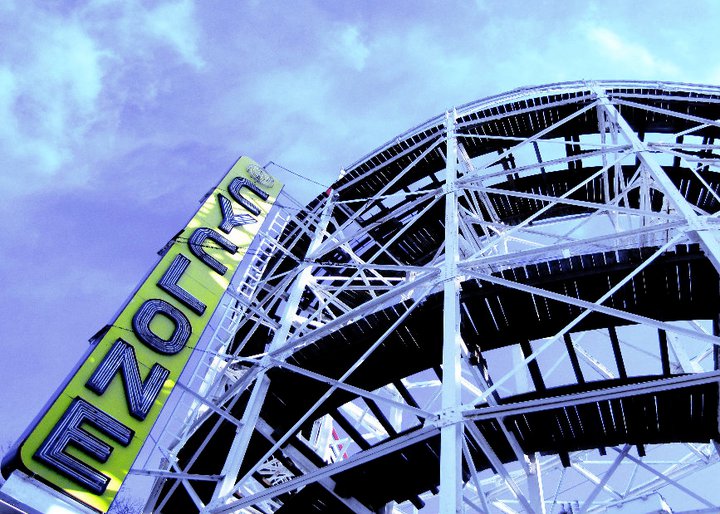 “Look at this,” my husband said, pointing to the Sunday NY Times’  “36 Hours in…” feature. This week it’s Brooklyn. Yes, Brooklyn. Who woulda ever thought, is right.

I first knew of Brooklyn by way of warning. “If a boy ever wants to take you to Coney Island,” my mother intoned, “don’t go on the Cyclone. He’ll just want you to snuggle up next to him.”

When I first moved to New York City in ’78, my roommates and I couldn’t afford Manhattan. But we could afford Brooklyn Heights. We had the bottom apartment of a five-story brownstone. It consisted of one huge bedroom, which we shared; a teeny kitchen; a living room with a parquet floor that gave way to a private garden (ours); a wrought iron spiral staircase leading up to a loft overlooking the living room; one and a half baths. It was an incredible apartment. The three of us scrimped each month to meet the $900 rent.

I fell in love with Brooklyn. Our street — Sidney Place — ran a single block between Joralemon and State. The church bells across the street were deep and resonant; every once in a while there was a wedding. The Promenade was a part of my morning run. I loved looking at the Statue of Liberty each morning and the World Trade Center’s soaring towers. The Heights’ main drag — Montague Street — had a hippie leather shop whose items I lusted after. With the first freelance check I received, I ordered an editor’s satchel. It held manuscripts in those days. Today it holds my laptop.

During those early morning jogs, I fantasized about living on Grace Court or in one of the stables that had been turned into co-ops. There were the fruit salad streets of Pineapple and Orange. One morning I happened upon the street where a college friend had lived. She boasted that her middle name was Prince. “Like Prince Street. In Manhattan.” Back then, Brooklyn was still just a borough. Manhattan ruled all.

Soon after moving to New York, I met the man who would become my husband. He was from Brooklyn. Natch. Our first date he took me to Coney Island. We rode the Cyclone. And yes, I dove into his embrace as the roller coaster’s rickety cars careened on tracks that pre-dated my mother’s own romances.

One day he showed me a watercolor he’d purchased some years before. It was of a street scene in Brooklyn. The title? Sidney Place, 1941. You can see my brownstone, halfway down on the right. We have a word for this in Yiddish — beshert. It roughly translates as “meant to be.” 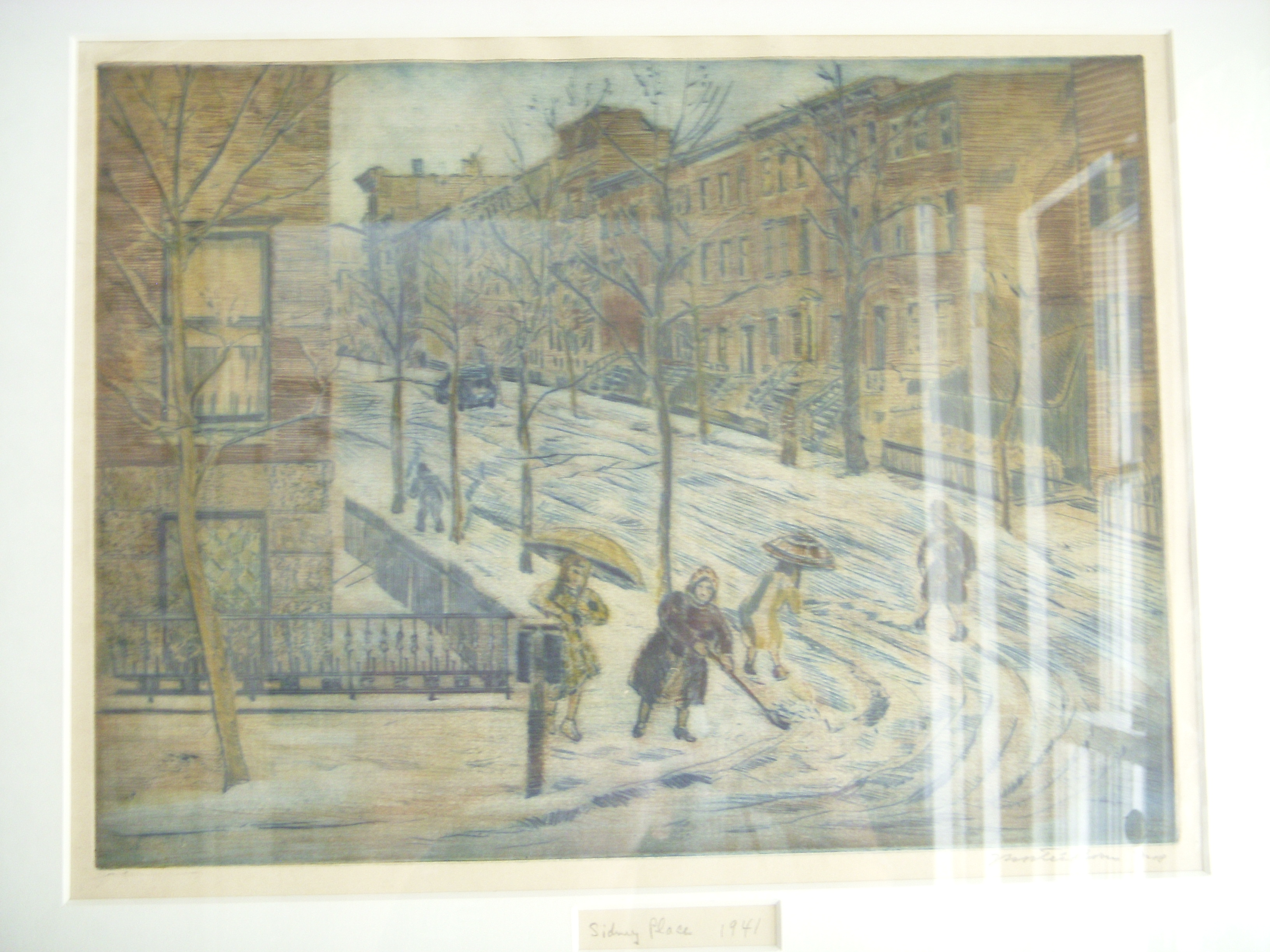 Transferred to Michigan on the cusp of becoming parents, we returned to Brooklyn twice a year. I had a love-hate relationship with the borough in those days. The trips were a trial: long car rides with cranky children (in one day no less!); the sirens that awoke my son as soon as I settled him from the last one’s shrieking; schlepping to one relative after another. There was the drunk we wanted to shoot. For four hours straight he stood on the sidewalk beside our building shouting, “Marecon, I kill your mother! Marecon I kill your father!” We never found out what a marecon was but the kids learned that “assho…” was not a vocabulary word they could use.

Those trips wove us all closer, drew us deep into the fabric of my husband’s past — the first cousins he played with like siblings; the aunts, uncles and cousins who were Holocaust survivors. Their accents, and the taste of apple cake and more, are imprinted upon our kids’ memories. I am glad for the pools we swam in and the stories of Ring-a-levio and Stoop Ball and Iron Tag. Suburban kids, Elliot and Emma not only got a slice of city life but planted deep within them is a rich period of post-World War II Brooklyn. People had little materially but possessed everything that makes for life well lived: love, determination, sorrow and tragedy, family loyalty, sheaves and sheaves of stories. Year after year we returned adding rings to our family history. Seders, bar and bat mitzvahs, weddings, funerals.

And yes, we took them to Coney Island, to the aquarium and into the area’s little Russia. We rode the Cyclone and walked the Boardwalk. We took them to the places of our courtship — the Brooklyn Museum and Botanic Gardens, Prospect Park. We went to Nathan’s for hot dogs; the neighborhood was rough but the dogs were great. Our kids are city savvy from those visits. As my son once said, “Michigan is home but New York is our roots.”

Emma moved to Manhattan after she graduated college. Brooklyn is out of reach for her at the moment. The borough is way hip now. I can’t even imagine the rent my old apartment would fetch. But Emma heads to Brooklyn every chance she gets. She dreams of moving there one day. Just last week she sent pictures from Coney Island where she traipsed the length of the boardwalk, lunched at a restaurant owned by Russians and stalked through the snow-covered beach. It comforts me to know that if I can’t have her in Michigan, I know she’s in a place that feels like home.

I still sometimes fantasize about living in a brownstone on Grace Court. Thirty six hours in Brooklyn? Better you take a lifetime.

Have I left you hungering for more? Here are three great books about Brooklyn:
It Happened in Brooklyn
When Brooklyn Was the World 1920 – 1957
When You’re from Brooklyn, Everything Else is Tokyo

And here is a photo of the beach — Coney Island like I never saw it. 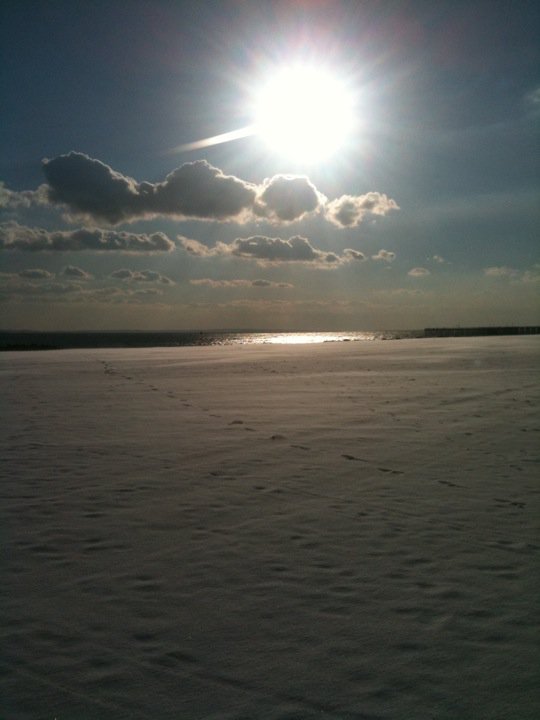